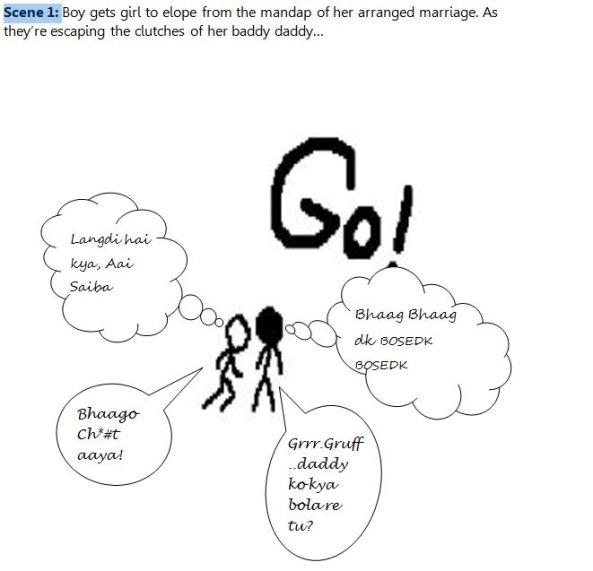 Aapro Hee-mes Besharmiya 😀 😆 is back with a bang! The bang being the sound of my forehead against the wall 😆 😆 😆

It would seem that Mr. Jack-of-all-trades-master-of-none’s role in The Xpose was tailor-made for him. An ex-cop turned Southern superstar who’s set his sights on Bollywood, Ravi Kumar’s persona is a troubling mishmash of Jaani’s arrogance, Rajini’s flamboyance and Big B’s vengeance! 😮 Even a cocktail has fewer ingredients! 😆

But the big cock that Besharmiya is, he shamelessly got the director to add one more facet to his character: Sherlock Holmes’ intelligence!!! 🙄

He tries too hard to pass off as a sleuth. Instead, with the mind-boggling lines he mouths, he comes across as a Ch#*@!!! 😆 😆 😆

When he’s being a bad-ass and beating the shit outta people, he says something to the effect of tumhaare ragon mein daudnewaala khoon mere moot se kam hain!!! 😮 Sheesh!

Set in the sinful sixties, B-towners are portrayed as an insecure, scheming, and promiscuous lot. As a much-married music composer, Yo Yo Honey Singh seems to yo yo between the pretties like a bunny in heat. While that may not be so far removed from reality, The Xpose shamelessly stereotypes. Predictably, it’s the aspiring Catholic actress who’s made to be the slut, the one without aatm sammaan. A la Zeenat Aman, she flaunts her…ahem…saamaan! 😛 The other newbie is Chandni, a clean baabdi (think Parveen Babi)! No prizes for guessing whom the hero will take home to his Amma 🙄

Anyway, the bad apple falls faster and harder than Newton’s apple from the Teesri Manzil? at an awards after-party where Yo Yo Honey Singh-er’s ‘After party’ and the whole skeleton jig would have made a whole lot of sense. That of course doesn’t happen. What follows will make you wrinkle your nose in disgust.

I shit you not, but the nasal wonder uses HIS NOSE!!! to sniff out the killer in this whodunit. There seems to be no other plausible explanation of how he could crack this baffler!

The nose is undoubtedly Besharmiya’s prized asset and he uses it to the maximum in The Xpose by poking his nose in others’ affairs! 😆

Even if you get free tickets for this one, just politely say NAAK-aa! 😆 😆 😆