While the whole planet is obsessing over the unfortunate demise of India’s First Female Superstar, I’d like to spare a thought for her nemesis, also the bonafide wife to the pathetic excuse of a man that they shared! 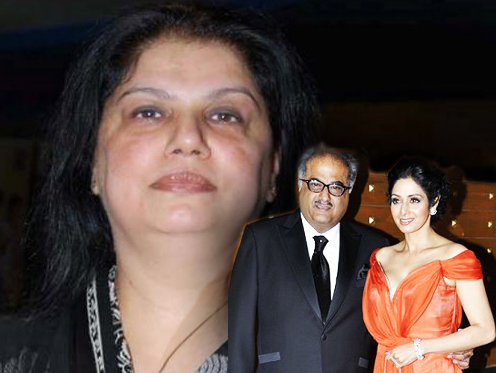 For those who aren’t clued in to what really transpired, Sridevi snatched her best friend’s husband from right under her nose! Whilst nestled in the latter’s plush house, no less!!! Gullible Mona had no inkling her generosity to shelter a homeless (and heartless) friend would soon render her lifeless. Her final few years were racked with physical pain and emotional upheavals. The Gods didn’t see fit to grant her even her dying wish…to watch her son on celluloid.

Mona was blessed with a firecracker of a mother, a personality type that would have put the fear of God in Boney. Sadly, she gave up without a fight in marriage and in life. She would have done well to learn from the woman whose example I’ve cited below.

There’s a lady I know who was so distraught by her husband’s infidelity that she beat the living daylights out of him. The lying rat concocted a sob story for the benefit of his folks. Who all ganged up against her and left no stone unturned in breaking up her marriage and family. Her judgemental father-in-law tried to tarnish her image with the same brush his son brushed his lying teeth with! He questioned his grandkids’ paternity, thereby questioning her character. Yet, he still hasn’t come forward with conclusive proof to give credence to his venomous spewings. This lady’s brother-in-law (husband’s brother) was an even bigger snake to orchestrate a sting operation of sorts, trying to get her to reply back to his flirtatious chats, and thus provide damning evidence against her. But the fact that this lady possesses a much superior moral fiber and regard for her marital vows is something these highly-qualified yet illiterate oafs will never get! Now had he chatted up his own adulterous sister using an alias, I’m sure he’d dig his own grave…for he’d surely die out of embarrassment with her shameless overtures!😂😂

In contrast, Mona had great in-laws and  could have stripped Boney to the bone. But she chose the dignified way to lie low and ultimately went to lie 6 feet below!

I quite like this woman. After all, she’s given us the affable Arjun Kapoor. But I wish she’d fought the injustice tooth and nail like the ordinary woman whose example I’ve mentioned above. The gutsy one who’d tried to slap some sense into her husband and smack her in-laws in their face with their failure in garnering evidence of her questionable character.  Dignity doesn’t always work in the real world.  Had Mona caused everyone to Rona, then I’d really love her. And would gladly call her my Mona Darling!