Anushka Sharma’s revamped honth made me go loth poth! 😆 I mean, even Kapil would stop ridiculing the nakli Mrs. Sharma if he saw the asli Miss Sharma’s puckers.

Now, apni Anushka is crazy about bats and men wielding crick(et) bats 😛 but brickBATS she never bargained for! She still vehemently denies going under the knife and wonders why things have ‘Blown Out Of Proportion’. We’re thinking the same thing too! 😉

Her manager has pointed fingers at a lip plumper as the rogue product in her vanity case!!! 😯 That seals the fate of a burgeoning (pun intended!) 500-crore-worth industry! 😉

I remember a statement, just as preposterous, issued years ago by Kangana Ranaut. When asked why her lips were suddenly looking fuller,  she pinned the blame squarely on….I shit you not!…TIGER PRAWNS!!! 😯 😯 Me thinks the ‘Tiger’ was the culprit alright 😛 and not the poor prawns! 😆 😆 😆

Below: Major correction needed! Replace the word ‘Next’ in the screenshot below with ‘Now Showing’!!! 😉 😀 😆 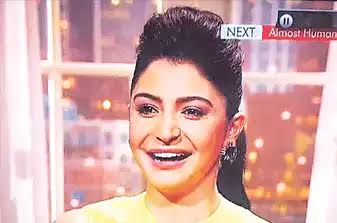 Being an ardent V-Day hater, I’ve always thought Cupid to be the most overrated of the Love Gods. Having witnessed the most absurd of B-town pairings in recent months, I now pronounce him daft! 😉

There’s one particular jodi that’s guaranteed to make your maatha fodi. There couldn’t be a better example of the perfect antithesis. She’s all politically correct and demure, he’s brash and immature. While her Goddess-like look makes eyes pop, he’s the proverbial dork, struts like a noisy cock and his talks make you balk. Many believe she has the best arse in the industry and the worst arsehole for a boyfriend from the industry! 😆

Meet B-Town’s official clown, the one and only, Ranveer Singh! (drumrolls)

Circa 2010. I was genuinely excited when the trailer of Band Baaja Baraat hit the tube for the first time. The impish hero of the film seemed so in the skin of his character and was so effortlessly natural, I confess to being momentarily blinded by the brightest star on the horizon. But it took one chat show with KJo and I could stand him no more!

Like I’ve stated earlier, ‘immature’ screamed and leapt out at me the moment the man opened his mouth. It was evident Ranveer Singh brags more than he shags 😆 😆 😆 He said something to the effect of Kareena visiting his adda and stripping him of his boyhood!!! 😯 No wonder Saif landed in the hospital right around that time with cardiac complaints! 😆 😆 😆

Anyway, getting back to the show, as her retarded boyfriend kept maaraaoing fataakris, a jubilant Anushka was bursting celebratory fataakris (in her mind). She now had the full sympathy and support of the entire nation in her grand plans to ditch her conceited boyfriend.

Karan, on the other hand, who was happily munching away, nearly choked on his cookie! He was so convulsed with laughter by the sheer hilarity of the statement, I think a little bit of pee came out! 😛 Before the show got rechristened ‘Cough-Pee with Karan’, a strategically-timed ad break thankfully prevented the inevitable from happening! 😆 😆 😆

Who advertises their stupidity so blatantly on national TV? Speaking of national, a hilarious episode comes to mind involving an immigrant relation from the husband’s side who’d settled down in Holland and was hopelessly in love with his new home. So much so that he had to deride everyone and everything from the place he’d come to holiday at. Excerpts from the boastful conversation:

Anyway (wiping off a tear) there should be a law in place that warns, ‘BOAST AND YOU’RE TOAST!’

Till that happens, Ranveer would have lost Deepika who, much like a shuttlecock, seems happy to be shuttling between two cocks with similar-sounding names 😆

There’s a reason why directors should stick to their genres. Ashutosh Gowariker should continue making period dramas, KJo family and teensy-boppy sagas, David Dhawan “senseless comedies” and Raju Hirani “sensible, thought provoking and soul-stirring cinema”. It’s when they stray out of their comfort zone that all hell breaks loose. Like an insufferable music director, who recently went on to direct, act, co-produce and bray in the biggest disaster of 2012! 😮

There’s another Jack-of-all-trades who wasn’t so bad at everything that he set out to do. Till lately, I had great respect for Mr. Bhardwaj. After all, he was the man who simplified some “heavy duty” Shakespearean bouncers for no-brainers like me! 😉

But, now, with MKBKM, the man has undone it all! Many I know came out of the theatre liking the rustic ‘political?’ satire. IMHO, Matru’s biggest Shatru was his highly polished’ Bombay Scottish’ zubaan that blew all earnest attempts at delivering an authentic Haryaanvi accent to smithereens.

Bijlee ( a reincarnation of Bulbul/ Shruti/ Ishika/Akira) struck me as highly unambitious. Always the one to fiercely cling to her comfort zone- a perpetual loudmouth spewing smart-ass comments, overtly (and shamelessly) sexual to the point of being a major tease, blatant dad(i)giri….this reads like an excerpt from Anushka Sharma’s resume! 😆

I’m convinced now that he truly is Shahid Kapur’s dad- both supremely talented yet both f*@&ed by the fickle finger of fate, with success always at an arm’s length!

I don’t know what it is with stringing a bunch of names together to christen your film. But since VB resorted to this inane antic, adding one more name to an already loooooooooooooooooooooooooooong title wouldn’t have hurt. This is where I have a bone to pick with Sir Bhardwaj. For me, the true star in the film was undoubtedly Gulabi! I was tickled pink every time the bhains made an appearance, grinning oh-so-cutely! 😀

JTHJ gives you 5 for the price of 1! A mish mash of several SRK greats- DDLJ, Fauji, Dil Se, Chak De and a generous dollop of Ghajini! Plus a liplock from the otherwise “celibate main leads” thrown in for good measure!

Certainly the last SRK- Yash Chopra collaboration, I had high expectations from the undisputed Kings of Romance, positioned in front of the camera, and behind.  They were good, like in all their previous ventures. Just not brilliant!

JTHJ showed me everything I’ve seen before, albeit done with greater finesse.

Samar Anand was a more haggard version of the Raj’s and Rahul’s we’ve seen in the past. Understandably so. But when one does all that he did two decades ago, I would say ‘Dude, move on!’

Akira was akin to our desi Shakira :D, jiggling and wiggling her lithe body dangerously. And if you thought she was loud in BBB, just wait till you watch her put even those deafening bombs to shame in JTHJ! 😀

And then, moving on to the poor little rich girl, whom all us envious girls love to hate. A pretty dumb bimbo- you can add a comma to the sentence if you like, and it’d still read the same! 😀

It’s embarrassing to watch Kat in the same frame as seasoned pros like a SRK or an Amitabh or even an Aamir. And no, it ain’t because of her clothes! 😉

KATS look best with someone from their own family- the TIGER!!! Now we all know that animals can’t act. They can only entertain and there’s a separate genre of mindless cinema conceived with them in mind. Sorry, I’m not BEING HUMAN now! 😀

But you now know where I’m heading- take all the Dabanggs & Mere Brother Ki Dulhans. But leave the Barfis, Rajneetis, Kahaanis & Talaashs to the experts.

BELOW: The ‘impotent’ wine that did nothing for me! 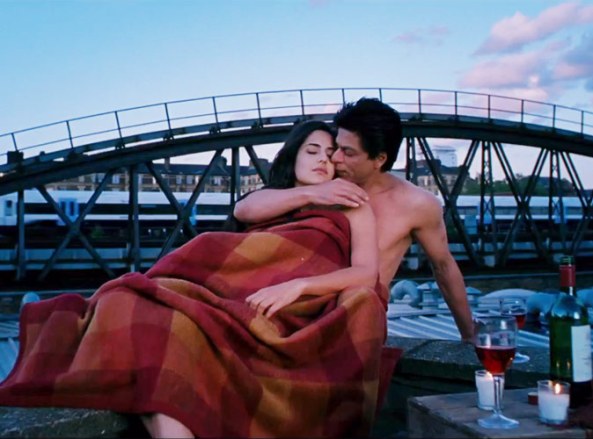