Isn’t it ironic that my review on a film dealing with speed should come crawling almost a week after its release? 😯
The weekend saw me holed up at home for fear of getting bombed up, what with it marking the anniversary of one of many terror attacks that have rocked Mumbai in the recent past. Little did I know that catching Bhaag Milkha Bhaag would accomplish the same result. That film just blew my mind!

‘Bhaag Milkha Bhaag’ is an exhortation to our protagonist at crucial, defining moments in his life. It assumes the form of a guttural cry from a dying father to escape from the clutches of murderous zealots active at work during India’s Partition. The same sentence later transforms into a fervent prayer slipping past the lips of his coach at the Olympics Finals held in Rome. So quite a symbolic title that!

Anyway, the film opens with the said race. Everyone’s heard of the adage ‘When in Rome, do as the Romans do.’ I’m sure Milkha Singh must have too. Being a distant relative of Santa Banta, he must have presumed that all they do is roam! 😆 SPOILERS AHEAD.

So roam he did! Instead of scrambling to achieve glory, our man began ambling away to glory! 😆 He bagged fourth place. To him it was life’s biggest disgrace.

The root cause of his dismal performance can be traced to the 1956 Olympics held in Melbourne. The voluptuous granddaughter of the Aussie coach must have hollered “Howdy mate?” and Milkha Singh must have interpreted the friendly greeting as “Let’s go mate!” 😆 It was evident we’d lost Milkha Singh cuz all I could see was MilKissing! 😆 Needless to say, India went Down Under in the races! 😆

I honestly don’t know how much of this biopic is fact and how much fiction. It seems rather incredible that the real Milkha Singh would have boasted so blatantly about his international conquests (albeit of a different kind!) 😛

The film ends with Milkha learning to slow down, to wrestle the demons that have been chasing him all his life and ending on a high- with a glorious nickname coined by a Pakistani at that!

With a run time of 3 hours and 10 minutes, the film is anything but racy! 😉 I shudder to think how much longer it’d be if the word ‘Bhaag’ wasn’t a significant part of its title! 😮

Watch this movie only for Farhan Akhtar. He’s as luscious as that juicy piece of sheekh! 😛 F&@#ing Hot with a capital F!

The performance he pitches in is the performance of a lifetime! He’s gotten so into the skin of his character, I’m sure he must be having trouble reverting to the Totla Akhtar he used to be! 😀

Sonam seems to be the new Sonakshi. A lucky mascot to propel a movie into the coveted 100-crore club. Anybody, absolutely anybody could have essayed her Biro. Even someone like Poonam (Pandey) who has a penchant for virile sportsmen. 😛 Come to think of it, maybe if she was around during the landmark finals and had promised to strip if he won, I bet my bottom dollar Milkha would not trip! 😆 😆

My son has been chanting, “Can’t change the girl? CHANGE the girl!!!” 😯

I don’t know if this is a prelude of things to come 😮 Anyway, I went to watch Chashme Baddoor this afternoon hoping to see what he saw in the trailers that made him ROFL.

I loooove all the types of comedies there are. Sensible a la 3 Idiots, the downright insane viz. Golmaal (2006) and No Entry, the certified no-brainers like Coolie No. 1 and Apna Sapna Money Money 😆 and even the raunchy ones 😉 Kya Kool Hai Hum and Bose DK!!! 😛 )…Lolllllz 😆 CB being the latest entrant!

It’s a good thing the Baadshah of Comedy forewarned us by choosing to christen his take on the cult classic with an ‘A’ instead of ‘U’! 😉

He may or may not have succeeded in putting an end to speculations that he was recreating the magic of the 80s but the unintentional? slight has certainly doled out sufficient warning that Chashme Baddoor is gonna be full of double entendres, lame puns, dollops of slapstick humor, lewdness and sleaziness galore to whet the crass? appetite of the stallwallahs (me included) 😆

The premise might be the same as Sai Paranjpye’s labor of love but that’s where the similarity ends. If you’re expecting the new to up the ante or even to knock the (g)old off its pedestal, you’re gonna be sorely disappointed. IMHO, Chashme Baddoor could actually pass off as Golmaal’s poor cousin. Taking a cue from the inane rhymes peppering almost every frame, here’s the story of CB in a nutshell.

Coming over to the performances, Ali Zafar is really making us ZUFFER (Mallu ishtyle) 😆 with his repetitive/deadpan acting. He ain’t no Shahrukh…oops…Farooq!!! 😛

Siddharth, as the Bollywood aspirant, will make you reach out for your aspirin with his garish Chi Chi/ chee chee 😆 ensembles. His performance, as the roving eye and kameena spy, is equally loud albeit one that will make you Laugh Out Loud!!! 😀

Divyendu, the shaayar, might be a kaayar, a liar, even the proverbial extra third tire 😆 but as a performer he’s nothing less than a live-wire!!! 😀

Taapsee is as gritty as laapsi 😆 who should plan her Vaapsi back to the Southern industry! Nothing like the fine, demure Deepti Naval we’ve come to love 😦

BELOW: Yanna Rascalas? You bet!!! 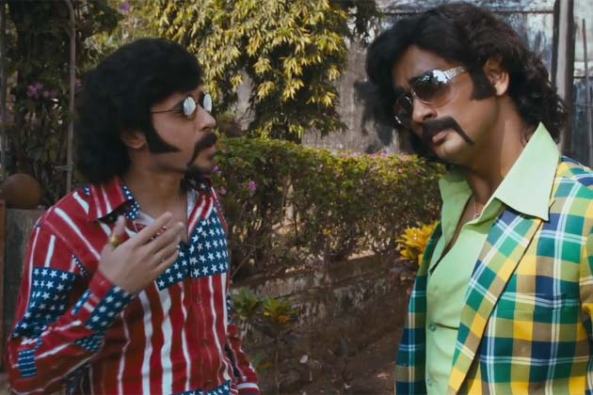 Last when I checked, the sexiest con artist there is on this planet, needed just 13 men to help him pull off a daring heist.

Apna toh Bollywood hai where more is merrier. So our desi Looney 😛 enlists the help of an entire OCEAN of men 😆 26 to be precise, none as delicious as their Hollywood counterparts, to be immortalized for executing Mumbai’s most daring daylight burglary.

Neeraj Pandey certainly is no believer of Christ and follower of Gandhi 😉 An eye for an eye is more his style, evident when Naseer gives terrorists a dose of their own medicine in A Wednesday and Akki raids the coffers of the corrupt in Special 26. Since both issues are irksome to the aam aadmi and also the law and justice dispensing machinery abominable, no wonder there was plenty of taali bajaaoing and seethi maraaoing in the theater! 😆

Pandeyji has splendidly slipped back into time and the characters have effortlessly adopted the ‘look’ and mannerisms of the Eighties. The heists truly orgasmic 😛 the performances stellar, the dialogues tongue-in-cheek, attention to the minutest of details brilliant…except maybe the haphazardly-painted green wall that had the herculean task of passing off as the Arabian Sea! 😯

The only real nit to pick is the love angle. You don’t always have to feel sorry for your lead appearing celibate on screen 🙄

SRK delivered possibly his career’s finest without a love interest in Chak De.

As is God’s style, Akshay managed the show single-handedly, with great aplomb, in OMG. Had they included ‘Gopis’ serenading him in every frame 😯 like they did in some of his highly forgettable flicks like Desi Boyz and Garam Masala 🙄 then that would count as a truly OMG! moment! 😀

Naseer didn’t need a mature lady friend like the Shabana Azmi types to propel his ingenious plan or to deliver a rousing speech on his behalf.

To cut a long story short, I don’t think Kajal Aggarwal belonged in Special 26…or anywhere else! 😀 Her ‘loud’ presence eclipsed even Bajirao Singham’s menacing roar 😆 and even made ‘bhaji’ of his tremendous screen presence 😆

The climax of Special 26 was not hard-to-see coming, a trifle absurd too, but for once, the film’s strengths are plentiful and the flaws few. That alone makes it a decent one-time watch!

The man made us wait and wait hard. 4 years is a helluva lot of time to come up with an ‘inspired’ script. But sabar ka phal meetha tha isliye….