It’s a good thing Bhaag Milkha Bhaag hit the screens when it did. Had its release clashed with that of Shuddh Desi Romance, we’d be scratching our heads as to which legend to be in awe of. Milkha Singh or milKISSing! 😆 😆 😆

Bolting from his own shaadi ka mandap, Sushant Singh Rajput as Raghu is quite the Flying Sikh. But a flying kiss (to the hired baraati he’s lusting for) is something the Emraan Hashmi clone will simply not settle for. 😆 😆 😆 Performing a tonsillectomy on her is more his style. 😛 What follows are a load of chikni chupdi baatein aur kaafi saari suhaani suhaag raatein! 😉

Raghu sung Gayatri (named rather aptly for she’s currently on Guy3 :lol:) begin living in (each other). Literally! 😛

Heck knows why the commitment-phobics decide to stamp their dubious relationship of din mein bhaiyya, raat ko saiyyan 😆 with society’s seal of approval.

Wedding bells ring and jittery pre-wedding balls shrink! 😆 😆 😆 This time though, Gayatri pulls off a Runaway Bride on Raghu, inadvertently giving him a taste of his own medicine.

An aborted wedding once again is mind-bogglingly followed by a tantalizing suhaag raat, this time with Tara! 😯 I was sure Vaani had something up her sleeve and would prove herself to be a Shaani 😆 by cleverly avenging the humiliation he caused her. Instead, she bowled us all a googly. Should I be saying Tara kya maara?

In a nutshell, I thought SDR is an extremely confusing coming-of-age film with equally confused protagonists. It’s a little hard to digest that people who are absolutely certain in their heads that the time-tested formula of marriage ain’t their cup of tea are actually shown to be hankering after the same damned institution, if only to propel the story forward.

I thought the film would be as tantalizing to the senses as Shuddh Desi Ghee. Who knew I was signing up for Shuddh Desi Khichdi? 😉

BELOW: This film should have been titled ‘Besharam’!!! 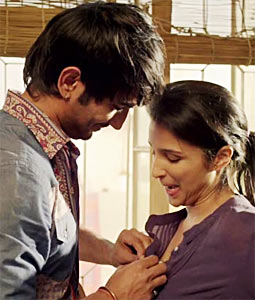